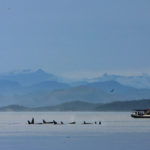 The Vancouver Island North area includes the traditional territory of the Kwakwaka’wakw First Nation, whose connection to the Max’inux or killer whale can be traced back through generations, not only through art, song and dance, but also through the verbal history of the Max’inux clan, whose ancestors are said to have descended from killer whales. Northern Vancouver Island is the habitat of eight species of cetacean and is a global trendsetter for whale research, responsible whale watching and conservation.

Commonly referred to as Australia’s premier whale watching site, Hervey Bay is an internationally significant whale new-born calf nursery – where whales prepare their young for the long migration back to Antarctic waters. In celebration of the whale season, the Hervey Bay 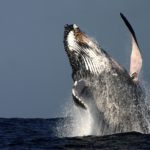 community plays host to the annual Oceans Festival which includes an illumination parade, a paddle out for whales and a seafood festival.