Day Two of the Summit 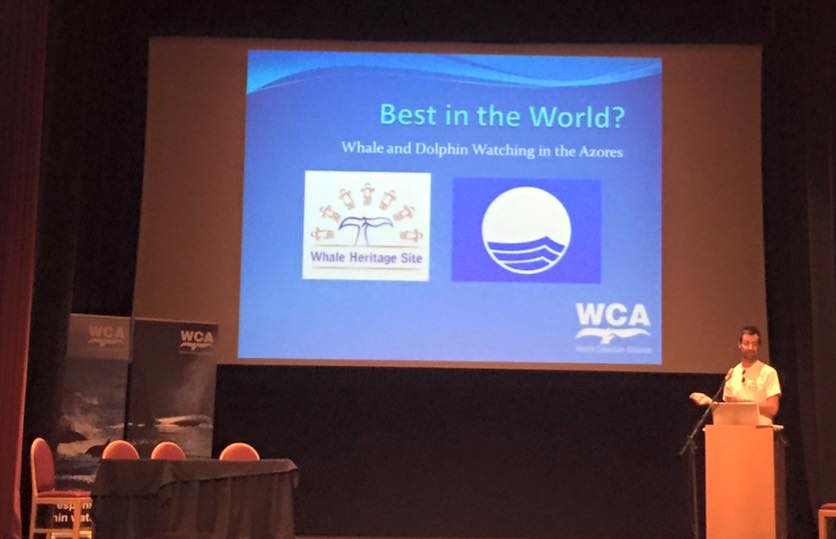 The interactive focus of the first afternoon continued throughout the second morning of the inaugural summit. First the films, talks and plays that had been created on day one were put on and presented by the various groups. There was much laughter but also some clear themes recurring across many of the performances – the pride and affection for their heritage shown by the people of the Azores; the feeling that to be able to celebrate this heritage there was a need for any programme to be truly inclusive and engage as many people as possible; and the agreement that the involvement and enthusiasm of young people was essential, as it is they who need to be inspired for any meaningful legacy to continue into the future.

Summarising the significance of the morning’s activities,the Dr Mike Tetley of the IUCN Joint SSC-WCPA Marine Mammal Protected Areas Task Force explained how the UNESCO World Heritage Site scheme assesses prospective sites. He drew upon one theme in particular – how a site needs to be seen as authentic and to offer ‘outstanding universal value,’ adding that for UNESCO, authentic means ‘being emotionally appropriate, of significance, purposeful and responsible’.

The groups then reconvened to explore the theme of authenticity and how it related to what they had seen during their tours of Faial Island on Day 1. Examples were given such as the Scrimshaw Museum, a personal yet extensive collection of whalebone artifacts largely bought and traded by three generations of owners of the museum and bar below with sailors who stopped off at the harbour. Or the presence of street art and graffiti that depicted whales on walls around the town. Or the simple fact that everyone you talked to on the island seemed to have family members who had been involved in whaling.

Next, Helena Beard from The Travel Brand Consultancy looked at the promotional opportunities that Whale Heritage Sites might offer. She suggested the identity would give destinations the chance to separate themselves from what she termed the ‘message monotony’ of much typical destination marketing with its relentless focus on food, architecture and festivals.

The audience then split into groups to explore possibilities for marketing Whale Heritage Sites, which they fed back to the group with ideas ranging from the importance of a recognisable brand; the visual and socially shareable appeal of infographics; the need to keep the designation exclusive so as to seem valuable; and questions as to whether most marketing should be centrally arranged or whether it should be left to individual destinations.

For the last talk before lunch, Rachel McCaffery, Head of Sustainable Tourism at the NGO Intasave-Caribsave, explored various ways that an assessment programme for Whale Heritage Sites might work. One of the challenges, Rachel explained, is striking the right balance between the rigour needed and demanded by the conservationists and scientists, and the desire of those more focussed on marketing a new scheme to the public for it to reach out to as many people as quickly as possible. She looked at various other relevant schemes – Quality Coast, Blue Flag, Travelife – and how their programmes worked.

The afternoon opened with Jared Towers from Canada’s North Island Marine Mammal Stewardship Association, telling the story of the importance of cetaceans to Vancouver Island North, which he said may be the place whalewatching started as a commercial activity. He told of the huge community connection to the whales, from an OrcaFest to online alerts announcing sightings to representations in First Nations peoples’ art and totems.

The next talk detailed a proposal for a Pacific Islands Whale Trail. The region had seen many of its whale species almost driven to extinction over the centuries, starting with 19th century foreign fleets hunting Sperm whales through to illegal Soviet whaling in 1959-1968 which almost wiped out the populations of humpbacks and other whales.

At the same time, however, the Pacific Islanders had long cultural links with whales, whether using bones from the carcasses of stranded whales to make tools and weapons, or the teeth in jewellery and for ceremonial purposes. The trail’s aim is to connect the islands through the routes followed by the various migratory whales that inhabit their waters, and celebrate the fact that the humpback whale has recovered from near extinction in the region.

Then Mary Alice Cerrito Fettis from Monterey Bay WhaleFest outlined the vast wealth of sea life in their region, and talked about how their bay can manage the growth in visitors and communicate with them so as to look after the destination. One example she gave was the use of QR codes in their signage to enable them to connect them to the many languages their visitors use.

The rest of the afternoon was given over to drawing together what had been learned from these two days – with the key terms that Whale Heritage Sites need to embody being agreed to be – local, livelihood, legacy and community. Expressions of interest were presented from various destinations around the world keen to seek accreditation. And, at the end of two rewarding days, Whale Heritage Sites were launched.